News Update: City Council changes up key appointments, gets good news on solar, and a strong report from EDCO

Yesterday, at its first in-person meeting since March 14, 2020, the City Council got good news from the Clean Energy Alliance for Del Mar residents with solar panels, received a strong report on the transition to EDCO for waste collection, and changed up key appointments, with Councilmember Druker replacing Dan Quirk as Del Mar’s representative on the North County Transit District (NCTD) Board.

A Ceremonial Swearing-In: With the last two mayors (Worden and Gaasterland) having served their most recent mayoral terms with Council meetings that were entirely online, a celebratory mood was palpable as councilmembers and staff gathered in Town Hall for the first Council meeting of 2023. Mayor Tracy Martinez conducted a ceremonial swearing-in of Councilmembers Gaasterland and Worden, who were re-elected in November 2022, presenting each with a Certificate of Election. They officially took office in December.

Good News for Del Mar Residents with Solar: Yesterday, the Sandpiper reported on a decision by The California Public Utilities Commission (CPUC) that will reduce compensation for extra energy put back into the grid by solar customers by 75% or more, under newly-adopted Net Billing Tariff provisions (NEM 3.0). At last evening’s Council meeting, Del Mar residents with solar panels got good news from the Clean Energy Alliance (CEA): the CPUC’s new provisions will apply to customers of investor-owned utilities such as SDG&E. However, the CEA sets its own rates, and signaled yesterday that it will not be adopting the CPUC’s new provisions. CEA was already paying its solar customers a higher rate of compensation than SDG&E for energy solar customers put back into the grid, and the difference will be even greater once NEM 3.0 takes effect.

An Environmentally-Friendly Rollout by EDCO: 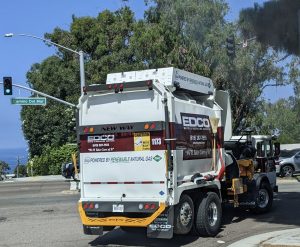 EDCO provided a detailed report to the Council on its solid waste collection services, after the transition last year from Waste Management, and the implementation of state requirements for the diversion of food waste from the landfill. Reporting 99% compliance in terms of residences having the three-cart system (with a green cart for organics including food waste), the commercial compliance rate of 61% is projected to reach 100% in March. EDCO’s first audit of waste streams has been completed, with containers randomly inspected, and with truck-mounted cameras recording the waste stream as carts are dumped.

EDCO also reported on the trucks that were specially ordered for Del Mar, with near-zero emissions, the capacity to pick up carts from both sides of the truck, and two-axle vs. the standard four-axle design for less impact on roads. EDCO also announced Feb. 11 as the date of the next Del Mar Recycles drop-off event, which will offer free on-site shredding, electronic waste, fluorescent bulbs, household batteries, and sharps drop-off, and free mulch for Del Mar residents on a self-serve basis.

Quirk replaced on NCTD Board: The Council made appointments for 2023 to regional and local boards, commissions, and committees. Most notably, the Council replaced Councilmember Quirk on the North County Transit District (NCTD) Board, despite his request to continue in that position.

Councilmember Gaasterland proposed the selection of Councilmember Dave Druker for the NCTD position, suggesting that Del Mar needs someone who will be viewed by NCTD as an experienced person, and who can achieve the kind of relationship that Del Mar needs with NCTD. The Council voted to appoint Druker to the NCTD Board by a 3-1-1 vote, with Quirk voting no, and Druker recused because the position pays a stipend. Gaasterland was selected as the alternate. Quirk frequently clashed with NCTD during his tenure on its board, at one point electing to lead a protest outside a board meeting rather than attending it as a Board member, and receiving a letter dated September 21, 2021 from NCTD’s Chair and Vice-Chair expressing concerns about his “continued communications to the NCTD Board of Directors (Board) on matters that are before the Board for consideration in a manner not in compliance with the Brown Act.” He sought to have Del Mar study the “future viability” of trains. With significant train-related issues pending that are of critical importance to Del Mar, it appears that the Council majority decided a change in its representation on NCTD’s Board was in Del Mar’s best interests going forward.