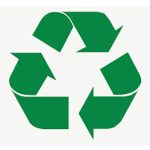 They arrived July 1. The new green bins from EDCO. Complete with the new rules to collect organic waste in addition to yard trimmings. This is not due to the transition to EDCO, but because of the State Bill, SB 1383, which requires all cities throughout California to divert organic waste from landfills.

Organic here does not mean the same as organic food (grown without pesticides, etc). Definition of “organic” according to the dictionary is “derived from living matter.” Thus, the simple EDCO motto: “if it grows, it goes.” Anything from a living organism (including meat or chicken bones, skin from a chicken, egg shells) goes in the Organic Waste green bin. Table scraps (if you have food left on your plate), vegetable peelings, go in. All food-related waste goes in.

To make it simpler to collect those table scraps, get a free kitchen caddy from EDCO. They say to wrap your scraps in any paper product – a newspaper, used paper napkin. Or, just put your scraps in the freezer and throw them in the green bin on collection mornings. A few things do NOT go in. No “compostable” bags, such as the ones in the produce section in Jimbo’s. Also, no plastic-lined paper, although food-soiled paper should go in your green bin.

Organic waste collection is free, for as many bins as you have. You are only billed for the size of your gray trash bin. So, put as much as possible into the recycle bin (blue) or organic waste bin (green) and save. Recycling is pretty much the same with EDCO as before, but with one difference. All plastics with a chasing arrow symbol go in. Styrofoam goes in, which was not allowed with Waste Management.Why is this important? Organic material that goes to the landfill emits large amounts of methane, a very potent Greenhouse Gas (GHG) that is 85x more damaging to the environment than carbon dioxide. All the green organic waste goes to ECDO’s anaerobic digester, where it is converted into renewable natural gas, the fuel that runs their trucks. So, no toxic emissions from their trucks, no fossil fuels used to run the trucks, and no methane produced in landfills. What could be better!