Commentary: 300 Million Reasons to be Happy

Author’s note: This commentary reflects my personal opinion, based on decades of work on environmental and rail issues as a former City and local government attorney, Coastal Commissioner, and elected official, with significant experience working with SANDAG, NCTD, and other regional agencies. It does not necessarily reflect the views of the City or my Council colleagues.

Thanks to the efforts of SANDAG, its Executive Director Hasan Ikhrata, and State Senator Toni Atkins, the recently enacted state budget includes $300 million for relocation of the rail line off the fragile Del Mar bluff.

Money talks, they say, and $300 million says that this project just became real.

This $300 million is enough to complete tunnel alignment studies and selection, environmental review, cost benefit analysis, technical specs and engineering, and robust community outreach — all necessary to get the project “shovel-ready.” That work can be completed in two years, give or take.

At that point, the project will be in good shape to qualify for federal and state infrastructure money and other funding, with a $2.5 billion estimate for the project, which is scheduled to be completed by 2035, and possibly earlier, by 2030. That’s only 7½ years from now!

It’s worth a pause for a shout-out to Hasan Ikhrata and Senator Atkins: they are what leadership looks like. We have 300 million reasons to offer our sincere thanks to them — Del Mar’s highest-priority project would not have this funding but for them. That is fact, not opinion.

The need for $2.5 billion (minus the $300 million already secured) sounds daunting. But the rail line generates revenue, there are opportunities for bonding and long-term financing, and there are hundreds of billions of dollars available at the federal and state level for infrastructure, greenhouse gas and climate, capital improvement, and more. For perspective, the delays caused by traffic congestion alone cost the U.S. economy over $120 billion per year.

Rail Relocation and a Tunnel under Del Mar are One Project 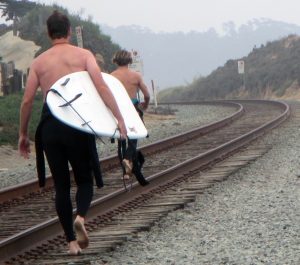 Fact #1: The rail line is not going away.

The sooner we accept these two facts, the sooner we’ll succeed in getting the tracks off our bluffs. See the Background Notes below if you are still unclear on these facts.

Where We Are Now

There are, for sure, legitimate tunnel issues we should address robustly. When SANDAG’s community outreach starts this Fall, get engaged! We need to actively participate in that process and get answers to key questions. Which of the alignments under Del Mar is better? What will the impacts be at the entry and exit portals? How will the tunnel be vented? How long will construction take, and what will the local impacts be? Will we feel vibrations on the surface, or in our homes? Will any property rights need to be acquired?

But the reality is that the focus going forward will be on the two alignments SANDAG has selected for the most detailed review, after rating all four alignments on a number of criteria (safety improvements, travel time, connectivity and travel demand, O&M costs, environmental consequences, and more). SANDAG presented their preliminary rankings and findings to Council at a public meeting, with opportunity for Council and community feedback. If someone tells you there are other alternatives, decline to go down that rabbit hole.

And SANDAG, not Del Mar, will make the final choice, consistent with environmental and other legal constraints. Del Mar can have robust input, but it does not have decision authority. Wishful thinking is counterproductive; Del Mar is served best when we are realistic and fact-based.

And we know that a tunnel under Del Mar at the proposed depth of 80 feet or more will be essentially unnoticed at the surface level. There are rail tunnels in the L.A. area that pass under neighborhoods, schools, and more, all without problems.

The rail line cannot stay where it is, and moving it off the bluffs is a high priority for all of us: SANDAG, the City of Del Mar, the Coastal Commission, NCTD, and above all, Del Mar residents.

Del Mar has a strong interest not only in train safety, but also in safe and legal beach access from the bluffs, the removal of the seawalls and the return of the Del Mar beach and bluff to their natural condition, and a bluff-top trail instead of a rail line. And sea level rise means that the option of leaving the tracks on ever more heavily-fortified bluffs is doomed to fail.

As your Mayor, I encourage everyone to get engaged as SANDAG works to identify the alignment, and make sure that it’s the best possible alignment and tunnel. But let’s not lose sight of the fact that if we want the rails off the bluff, a tunnel under Del Mar is in our future. Let’s not lose valuable time resisting that fact. We should be all in, and all together, going forward.

And let’s thank Sen. Toni Atkins, SANDAG, and its Executive Director, Hasan Ikhrata, for their leadership that has given us 300 million reasons to be happy.

Why the rail line is not going away:
The LOSSAN rail corridor (named for Los Angeles – San Diego – San Luis Obispo), which runs through Del Mar, is the second busiest rail corridor in the country, after NY-Boston. It currently carries 60+ trains a day, going to 100+ in a few years. It is part of the Strategic Rail Corridor Network (STRACNET), signifying its importance to national defense and the Dept. of Defense’s rail needs for almost 200 defense installations. Both BNSF (freight) and AMTRAK (passenger service) have the right to use the rail line, and have no inclination to give that up. Commercial rail moves nearly 40% of the nation’s goods.

NCTD controls only the Coaster. NCTD cannot close the rail line even if it wanted to do so; neither can SANDAG, the State, and certainly not the City of Del Mar. Rail service is an important player in climate action, traffic congestion management, and the economy. The Port of San Diego alone generates about $8 billion a year in economic activity heavily dependent on this rail line. Those who think the rail line can be closed are wrong.

Why the rail line cannot be relocated to I-5:
SANDAG has made it clear that it is infeasible to relocate the rail line to I-5. It would require multiple tunnels. A train cannot navigate more than about a 2% grade, so virtually every hill and overpass would need to be tunneled. Moreover, it would require running the rail line through our lagoon, which would be hugely destructive. The I-5 option is far slower, more expensive and more damaging than other options.