Trains, Planes and Automobiles: Is NCTD Our Climate Change Partner, or Our Enemy?

Buckle your seat belts, Del Mar: the campaign season has unofficially begun, with some bare-knuckled, if not particularly factual, attacks on Mayor Worden over NCTD-related issues. 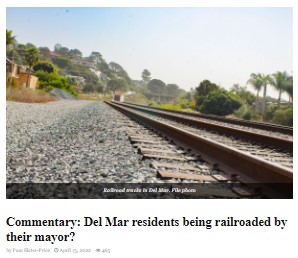 Hershell Price quickly amplified Slater-Price’s commentary by sending it to Del Mar voters in an eblast that is effectively an early campaign hit-piece.

The City of Del Mar letter that Slater-Price attacked Worden for was, in fact, written by the City Manager, based on the direction of the entire City Council. City Manager Ashley Jones stated this on the record at today’s Council meeting Correspondence like this is routinely signed by the mayor, whoever that happens to be.

It’s worth noting that Slater-Price chastised only Worden, and not her political ally Councilmember Druker, for supporting the fence compromise that would have explicitly granted public access to the upper bluff trails and ensured that if NCTD installs a fence on the upper bluff, it will be a lower profile, 4’ fence rather than a 6’ one that blocks access to the trails.

Will the City Manager’s clarification as to the letter’s origins result in a correction by Coast News, Slater-Price, or Price? Our current “alternative facts” political climate suggests not.

Apparently, a dispute over a fence obligates all Del Mar officials to treat NCTD — whose 101 Bus and Coaster train service provide public transportation for Del Mar — as our enemy.

Meanwhile, Councilmember Dan Quirk continues his one-man anti-train campaign, arguing against the future viability of trains – as though it is in Del Mar’ interest to see hundreds of self-driving tractor-trailer rigs added to I-5’s already congested traffic, along with additional passenger vehicles, if his vision of discontinuing train service between Del Mar and San Diego becomes a reality. 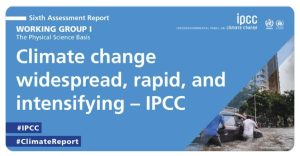 Science-based institutions on every level – local, state, national and international – have sounded a “code red for humanity” alarm for climate change. Trains and public transit are a critical component of efforts worldwide to reduce our carbon footprint.

Emissions from transportation account for about 27 percent of total U.S. greenhouse gas emissions, making it the largest contributor of U.S. GHG emissions (source: EPA). So, if Del Mar wants to do its part in addressing climate change, transportation has to be a key focus of our efforts. It is in our interest to help NCTD succeed in making public transit (and yes, freight trains) a cost-effective and practical alternative to the passenger cars and big rigs that clog our freeways and spew GHGs.

Our European allies understand the importance of trains (vs. cars or airplanes) in meeting climate goals. And leading U.S. engineers do too: they’re testing autonomous, electric freight trains on California tracks. 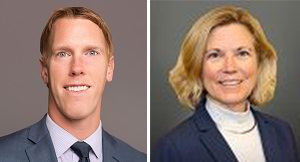 We have yet to hear a single word from Del Mar’s representatives on NCTD’s Board – Dan Quirk, and Terry Gaasterland as first alternate – as to what they have done, as part of NCTD’s governing body, to improve public transit in Del Mar and North County in order to reduce GHG emissions from transportation.

We’re fiddling while Rome burns – and our City Council’s focus appears to be on re-branding NCTD as our mortal enemy, rather than working with them as our essential partner in climate action. As the Sandpiper has editorialized recently, it’s past time for more adults in the room, to provide leadership for Del Mar on existential issues including climate change. Adults can figure out a way to oppose NCTD’s fencing plan and still work as effective partners with NCTD on critical issues like climate change.