On Thursday, Nov. 18, the NCTD Board took specific steps to re-activate its fencing plans for the tracks on the Del Mar Bluffs. These would take place immediately after the Dec. 31 deadline for its settlement negotiations with the City of Del Mar and the California Coastal Commission (CCC) related to the legal action pending before the Surface Transportation Board (STB) (see “Background,” below).

Two specific actions: NCTD’s General Counsel, Lori Winifree, publicly reported two specific actions taken by the Board in closed session on Thursday: “First, the Board authorized staff to pursue the Surface Transportation Board declaratory relief action and request to render an expedited determination if the parties fail to reach agreements by Dec. 31st of 2021. [Second], the board directed staff to place an item on the January 2022 Board agenda to consider advancement of a construction project for fencing on the Del Mar bluffs.” 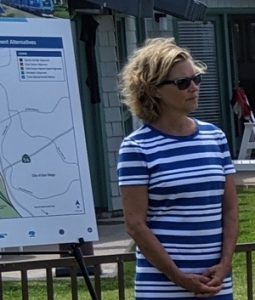 Mayoral Silence: We are puzzled and dismayed by our Mayor’s lack of urgency and transparency on a matter of such importance to Del Mar. On Friday morning, Nov. 19, Mayor Gaasterland presided over a City Council meeting — the continuation of its Monday, Nov. 15 meeting that had been cut short by a power outage. The day before, Mayor Gaasterland had attended the NCTD Board meeting as Del Mar’s alternate representative, since Council member Quirk was unable to attend.

The City Council agenda regularly includes an item, Regional Organization Reports, where Council members report on the regional organizations where they serve as Del Mar representatives, such as NCTD. It was the perfect time and occasion for the Mayor to report these NCTD board actions, since they are matters of such vital interest to the City and its residents.

Instead, when Mayor Gaasterland reached this agenda item on Friday morning, she announced that this item was going to be skipped — and it was, save for a report on the Clean Energy Alliance that Council member Druker asked to give. Thus, the Mayor chose silence over a report on NCTD’s actions on the STB petition and fencing proposal that were taken the previous day. At NCTD, that report was made in open session immediately after the closed session ended on the STB matter. The Mayor was aware of the report since she communicated it to the City Manager and City Attorney, but​ she chose not to disclose it to the public and her Council colleagues during the Council meeting.

NCTD, and not CCC, is the entity that holds Del Mar’s fate in its hands with respect to fencing and track maintenance issues. It might be expected that Del Mar’s NCTD representatives, currently Quirk and Gaasterland, would work to cultivate the relationships that promote success of Del Mar’s goals and interests on these matters. Instead, both appear to prefer organizing public protest, as though they were outsiders, rather than serving effectively as NCTD board members advancing Del Mar’s interests. Indeed, our primary representative to NCTD spends most of his energy making it clear that he does not support NCTD’s public transit mission, as the Sandpiper has regularly reported since his election.

Background: In 2020, NCTD filed a Petition for Declaratory Relief with the Surface Transportation Board, seeking confirmation of its assertion that NCTD has sole authority over railway matters with respect to the railway tracks it owns, including bluff repairs and fencing of the track right-of-way. NCTD’s legal action is currently paused for settlement negotiations with the City of Del Mar and the California Coastal Commission, which have a Dec. 31, 2021 deadline.