In a career spanning over seven decades, long-time Del Mar resident Bertram (Bert) Turetzky has done much to bring the solo bass into the spotlight.

One of the most versatile instruments in the world, the double bass is essential to the great classical and folk music traditions of Europe, and equally important in the development of jazz, early rock and roll, country, bluegrass, and tango. Yet, for most of its history, it has been seen only as a supporting player in the ensemble—never the solo instrument.

“I realized that I wanted to change not only the musical image of the bass, but to make it a first class citizen,.” Turetsky noted in a 1992 interview with Bruce Duffie. Equally at home in the avant-garde, classical, jazz, and world music scenes, Turetzky has premiered over 300 compositions written expressly for him, works that revolutionized the idea of the bass as a solo instrument. Recording frequently from the 1960s onward, Turetzky is now quite possibly the most recorded bass soloist in history. 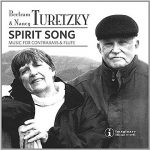 Sampling from his discography, we can appreciate Turetzky’s artistry, skill, and musical curiosity. Spirit Song, a collaboration with his wife Nancy (an esteemed flutist herself), is a perfect introduction to Turetzky’s musical interests. The album begins with a set of four Renaissance madrigals by Jacopo da Bologna. The opening sound of flute underpinned by pure, ringing bass harmonics is otherworldly. Turetzky’s instrument might be mistaken for some ancient woodwind or horn if one had never heard a bass played in such a manner. The rest of the album is no less surprising, including the jazzy “Monk’s Blues,” and two of Turetzky’s own compositions, “Fracas” and“Spirit Song,” which draw upon modernist and world music traditions, respectively.

Turetzky is perhaps most known for championing the work of modern composers working in the avant-garde scene, including colleagues at the music department of UCSD, where Turetzky was a revered pedagogue for over 30 years (now Emeritus Faculty). His 1964 recording, Bertram Turetzky – Recital of New Music, begins with a bang—a literal explosion of electronically generated sound, before Turetzky’s bass enters with a flourish, rallying valiantly with alien sounds that ping pong from speaker to speaker. Important works for the bass by modernist uminaries such as Ben Johnston, Donald Martino, and George Perle are also included. As a document of the important trends in American avant-garde composition in the 1960s, it is hard to imagine a finer album.

During the pandemic, Turetzky began staging concerts from his front patio on Sunday afternoons. Speaking in 2018 to The Baltimore Sun (on the occasion of his 85th birthday), Turetzky was enthusiastic: “I still love to play music and have to keep my body together so I can continue to play. I love the instrument I play.”